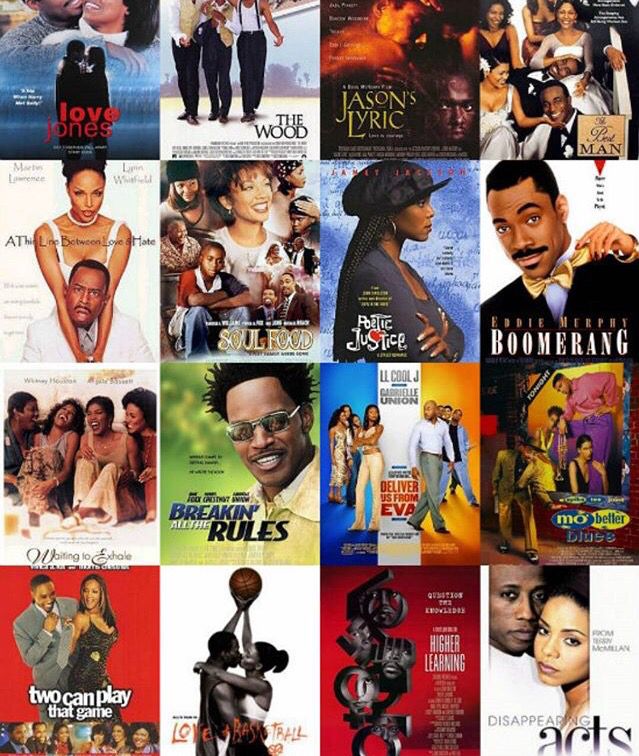 LOVE JONES | 1997
A young black poet on the verge his publishing his first novel starts dating a talented photographer seeking to level up in her career, while they both try to figure out if they’re in love or just kicking it.

LOVE & BASKETBALL | 1999
Two hoop stars love and play basketball together through many different challenges from childhood to adulthood.

DISSAPEARING ACTS | 2000
Sanaa Lathan and Wesly Snipes are at their best in this compelling romantic drama about a struggling construction worker and an aspiring musician from two different walks of life.

CLAUDINE | 1974
In the 1970s Harlem, garbage collector Roop falls in love with Claudine, a single mother of six on welfare. One of the most authentic accounts of black life on film.

BROWN SUGAR | 2002
Friends since childhood, a magazine editor and a hip-hop record executive stumble into romantic territory. This is technically a rom com, but the love story is the foundation.

SYLVIE’S LOVE | 2020
When a young woman meets an aspiring saxophonist in her father’s record shop in 1950s Harlem, their love ignites a sweeping romance that transcends changing times, geography, and professional success.

DADDY’S LITTLE GIRLS | 2007
A father doing all he can to provide and protect his three daughters, while falling in love with his lawyer in the process. It’s a comedy, but the love story keeps it going.

POETIC JUSTICE | 1992
Grieving hairdresser and poet goes on a road trip from South Central L.A. to Oakland on a mail truck alongside her friend and a postal worker which she cannot stand, but eventually grows to love.

THE PHOTOGRAPH | 2020
The discovery of a hidden family photograph sends a girl on a quest for answers regarding her estranged mother’s past and ignites a powerful, unexpected romance.

THEIR EYES WERE WATCHING GOD | 2005
Based on the bestselling novel, this drama is set in the 1920’s, where a free-spirited woman’s search for happiness leads her through several different marriages before finding the love of her life.

A WARM DECEMBER | 1973
A doctor falls in love with the niece of an African ambassador during his vacation in London, but it turns out that she is suffering from a rare terminal illness.

QUEEN & SLIM | 2019
A couple’s first date takes an unexpected turn when a police officer pulls them over. After a cop is shot dead in self-defense, the two fight to stay alive and grow to love each in other in the process.

JASON’S LYRIC | 1994
Two brothers, survivors of family tragedy, take different life paths: one falls for a high-spirited waitress and dreams of success, the other follows a life of petty crime.

BLACK COFFEE | 2013
After being fired from his father’s company, a painter falls for a lawyer who inspires him to start his own business. One of the most positive black films ever.

THINGS NEVER SAID | 2013
An aspiring poet in a troubled marriage sparks with a new man who helps her find her artistic voice.

TRUE TO THE GAME | 2017
Based on Terry Woods best-selling novel, this crime thriller is about a Muslim drug lord who seeks to give up the game after falling for an aspiring novelist.

What about you… What are your favorite black love movies?