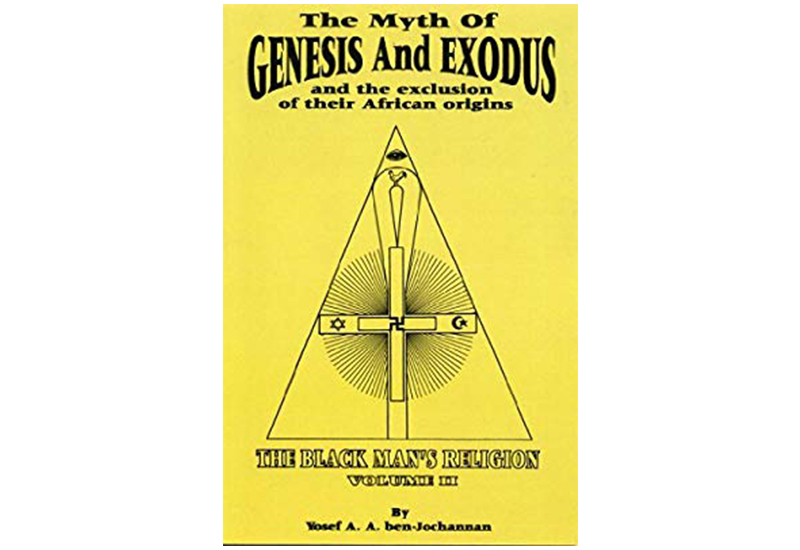 For many people in America, the biblical stories of Genesis and Exodus are real life events that historically happened. From this perspective, the majority of society, especially us Black Americans, believe that the biblical narratives of creation is the foundation for humanity’s modern circumstances. And therefore, we each seek to live our lives according to the moral standard of what’s written in the bible, in order to overcome our modern day evils.

But what if our beliefs about the bible were wrong? What if the biblical stories of creation never historically happened? What if the stories of Genesis and Exodus were based upon the myths of earlier cultures? If so, would this propel us to change the way we see the world and live our lives? These are some of the questions that i thought to myself as I read the book, The Myth of Genesis and Exodus and the Exclusion of their African Origins.

In this 75 page book, the late and famous black historian, Dr. Yosef Ben Yochanan, also known as “Dr. Ben”, reveals the origins of the Genesis and Exodus stories and traces them back to the myths and stories of ancient Africans, mainly the Egyptians. Although I have read and reviewed other books from other authors who shared a similar view, Dr. Ben’s perspective is much more interesting because of his background.

Dr. Ben was born and raised as black a jew from the Falashas of Ethiopia. Therefore, he knows the bible and the Hebrew culture very well and had every right to defend it as being true, yet he chose to do the opposite and expose it as being false. For this reason, I have great respect for Dr. Ben and consider this book (as well as all of his others) to be one of the best resources on the subject of the bible. So I want to share with you some of his insight and research with you below.

The Origin of Genesis

In regards to the roots of the Genesis story, Dr. Ben showcases in this book that these events came from the stories of the ancient Egyptians of the Nile Valley Civilizations. On this subject he writes: “It was there, along the banks of the Nile River [blue and white], the Atbara River and the Great Lakes of Africa, also along the banks of Asia, Tigris and Euphrates River, that said interplay and amalgamation of mankind’s Genesis stories were created and developed.”

In regards to African backdrop of the Genesis stories, Dr. Ben says: “The source of their (the slavemasters) religious beliefs is still in the teachings of the Nile Valley Africans Mysteries System of the Grand Lodge of Luxor – which taught that: “IN THE BEGINNING WAS THE WORD.” He goes on to say that “this biblical concept was uttered by the Africans who worshiped the Sun God – Ra, Amen-Ra, Ptah-Ra, etc. for thousands upon thousands of years before there was a Hebrew God named YWH.”

This means that the first verses in Genesis came from Africans, not Hebrews; and that it was about an African God, not YWH. Therefore, the story of God revealing to Moses that His name was YHWH in the bible, was either made up or altered. And according to Dr. Ben, if Moses truly existed, he would have had to been trained in all of the the Gods of the Egyptians before assuming his role as a High Priest in Egypt and ever coming to know about a Hebrew God.

For it would have been impossible for Moses, or anyone else in Egypt at that period, to have raised to one of the highest rank in government of Pharaoh Rameses the 2nd Inner circle cabinet or Chamber and was not himself trained in the religious rites of the Mysteries under the priests of the the religion of God – Amen-Ra.

Dr. Ben’s statement is also backed up by the bible, which tells us in in Acts 7:22 that Moses was learned in all the ways of the Egyptians. Therefore, the teachings of Moses that he gave to the Hebrews were actually teachings he’d learned from the Egyptians and other cultures of the Nile valley. Dr. Ben proves this himself in his book by listing many different ancient African sources that have the old testament sayings within them such as the “Papyrus of Nesi-Ansu”, the “Book of The Coming Forth By Day and By Night” and the “Instruction of Amen-em-opet”, which all predate the existence of the bible.

According to Dr Ben, the Africans living along the Nile Valley developed the first spiritual system and moral teachings in history, as well as the first civilizations and learning institutions and libraries. In regards to how their teachings were used to form the writings in the bible, He states: “It was not until Aristotle sacked the Library of the grand Lodge of Luxor [Thebes, Egypt] in 327 B.C.E., and brought into Egypt hundreds of Greek students to study under African priests who taught them the ancient philosophical concepts and secrets of the Nile Valley Africans Mysteries System.”

These Greeks then took the writings, histories, spiritual concepts and myths of the Egyptians and later to develop and compile their own writings, which make up most of the writings of the western world today. The most famous of their works became known as the Old Testament, beginning with the books of Moses. To prove that Genesis is a copy and in fact not a true account of history, Dr. Ben writes: the final editions of Chapters 1 through 11 of Genesis was not written until the 5th century B.C.E.” This alone proves that Genesis came from African sources, because the events in Genesis that allegedly took place wasn’t written until 2500 years afterwards.

The Origin of Exodus

After reading about the myths of Genesis, you already know that the book of Exodus is also based on a myth. In regards to the roots of the biblical Exodus led by Moses, Dr. Ben reveals in his book that these types of stories were very common among the ancient African people of the Nile and that the “Exodus of the Hebrews was just a another version of what they had learnt from the Africans with whom they lived in Egypt, Sudan and Meroe” and these stories are still “common in Africa to this day wherever the people depend totally for living on a majority body of land-lock waters.”

On the subject of Moses staff turning into a serpent, Dr. Ben writes: “We read about the same type of Miracle having been performed all over the ancient world of Africa and Asia before the birth of the Hebrew patriarch – Abraham.” In regards to Moses staff or rod parting the waters of the red sea, Dr. Ben stated that “the gods of the African nations along the great Lakes region of Central Africa were already doing the same” way before the time of Moses. To prove his case, he lists the sources of where these ancient stories derived from, such as the “Canaanite Epic of Keret” and the “Folklore of the Kenda peoples [Khaffirs]”.

In regards to the miracles of the biblical exodus, Dr. Ben poses the question, “Why is it that Moses and Aaron’s mysterious magical acts or fetes are to be considered facts and/or truths; but not those performed before the birth of both… by fellow Africans who worshiped other Gods than Ywh?” This question is very powerful and caused me to stop and think. As I pondered on this question for myself, it made me feel sad of the fact that we have been brainwashed to accept the stories that Europeans gave us as truths, and disregard our own stories, although they came before theirs. If that ain’t mental enslavement, I don’t know what is.

Anyways, moving along, Dr. Ben also talks about the torah or the law of Moses. On the subject of where the commandments inside the bible came from, Dr. Ben states the following:

“Many of the recitations from the negative confessions [42 laws of Ma’at] were plagiarized by Moses and/or other Hebrews to form what is today called The Ten Commandments and others, in the five books of Moses… And Moses had to know everyone of the negative commandments when he received his education in the Mysteries System Lodges.”

Therefore, the foundation of the biblical commandments along with the rest of the old testament, came from the teachings of ancient Africans, which I have also wrote about here in previous articles. To further prove his case, Dr. Ben also references the works of historians who lived before his time, who also stated that Moses was an initiate into the Egyptian mysteries. So the biblical exodus and all that follows after it, should be accredited to the African folklores they were stolen from.

The Myth of Genesis and Exodus is a great reference guide for anyone researching the origins of the bible or seeking to learn more about their African roots.

Although Genesis and Exodus are not true accounts of history, it is very clear that the original story behind them were indeed about black people. Therefore, learning about the bible’s African origins helps to connect you back to your ancient roots. Not the bible itself, but the African stories and cultures that were used to create the bible.

This is why the bible is so well received by us — outside of the fact that it was forced onto us during slavery — because it still has hidden elements within it that covertly reveal our ancient history. The history that has been stolen from us. So if you want to learn more about some of that history, check out Dr. Ben’s book here.