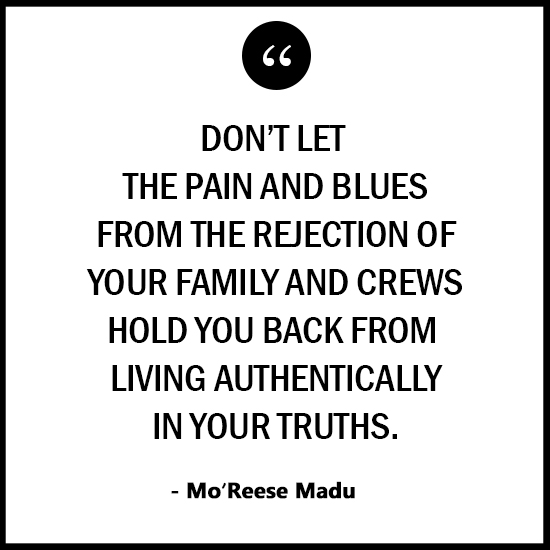 As you evolve and expand your consciousness beyond America’s way of life, everybody won’t get it. And this can cause friction in many of your relationships with people. Sometimes, people not understanding your growth, makes them look at you negatively, have hateful arguments with you or even want to end your relationship altogether. And depending on how close yall were, it will hurt deeply.

In my experience, it has always been those closest to me — blood relatives — that have rejected me for my lifestyle choices. Over the years, my family would often get upset with me because I refused to participate in European ways of living, such as religion, diet, holidays, etc. And even though I didn’t condemn them for doing so, the fact that I chose not to, caused horrible fall outs between us.

Over the years, I struggled internally with the riffs that would frequently occur between me and my family. Though I never would change my lifestyle for them, when I came around them, I would often let a lot of things slide for the sake of keeping peace. But despite my efforts, nothing ever quite changed. Year after year, another fall out would happen, simply because I refused to live my life the way they desired me to.

Eventually I realized that nothing will ever be the same between us again, and that maybe it was meant to be that way. Often times, the people we are afraid to lose are the people who are holding us back from living our best life. So I recently learned to be okay with not having the acceptance or understanding of my own blood family; and to just let them be. Though this hurt at first, there are always great lessons to be learned from pain.

I picked up a great deal of wisdom about people over the past few years; both from my family and others. I learned that when people have issues with you for being true to yourself, it’s often because they are not being true to themselves. Your courage is a reflection of their fears and your growth exposes their stagnancy. In essence, the issues they have with you, stem from the issues they have within themselves.

So don’t allow people’s discontent with their life to prevent you from evolving in yours. Keep growing and becoming the best person you can be. After all, that is what we were born to do, right? I’ll let you answer that for yourself. Peace & Love!