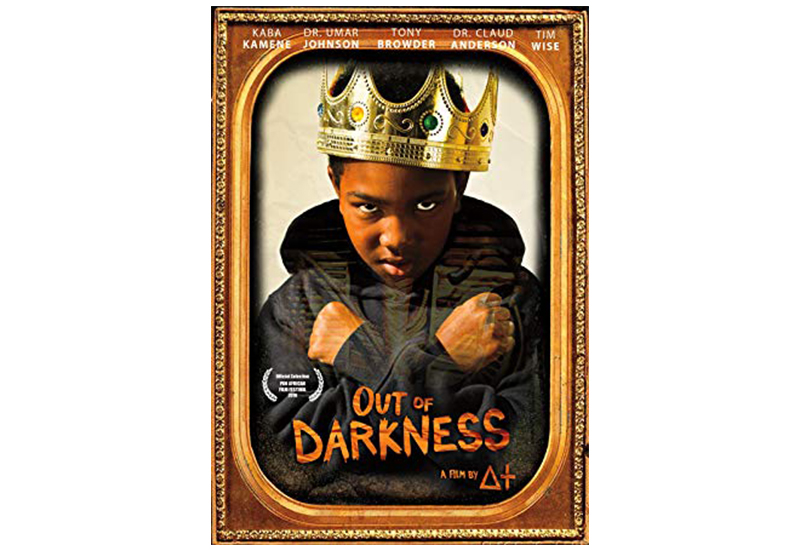 The lack of knowing our true identity has been one of the main causes of our mental illnesses and dysfunction within the black community. And the reason why so many of us grow up not knowing who we are is because our parents and educators don’t teach us. Not because they don’t care to, but because many of them don’t know who we are either. Therefore, the only history about ourselves that we do get taught is the recent history of our plight here in the United States, and even that is watered down. As a result, most of us grow up thinking black history begins with slavery and never learn about who we were before colonization.

To put and end to this generational cycle, film-maker and producer, Amadeuz Christ, created an amazing educational documentary that reveals to us our true history called, Out of Darkness. This film not only touches on our history before slavery, but it also explores the history of hue-manity, the Nubian/Kushite origins of Nile Valley Civilization, and contact between blacks in Africa and the Americas since the times of antiquity. In addition, this film also analyzes how we were sold into slavery, the mental issues that we carry from slavery, the history of modern day racism and how we can overcome our current social conditions.

On top of the subject matter, what makes Out of Darkness so great is its all star cast. The film is narrated by renown historian Prof. Kaba Kamene and co-stars some of the our greatest black scholars around, such as Dr. Umar Johnson, Dr. Claud Anderson, Prof. James Small, Dr. Joy DeGruy, Anthony Browder and his daughter Atlantis Browder. And each of them bring their expertise to the film and drop some heavy gems on our history and social issues that are unknown to most people.

I first saw this documentary about 3 years ago when I was very deeply involved in the Hebrew Israelite faith. I enjoyed the documentary back then but I was not able to gain as much knowledge from it as I could have, because my biblical beliefs prevented me from accepting certain truths in regards to history and God. Now that I no longer subscribe to any religion or biblical organization, I recently watched this film again and gained a great deal of historical appreciation for it.

One of the main things I dig about this doc is that it discusses how the powers that rule over us, intentionally suppress black history to convince us and others into believing the lie that we have no pre-slavery history that white people were the first civilizations. On this subject, Prof. Kaba and Anthony Browder point out the fact that by them erasing our stories, whites were able to impose on us their stories, and therefore programed us to act in their favor. I appreciate their commentary because these are the ideologies that I’ve speaking and writing about for years.

“If you want to oppress a people, you take their language, take their history, take their values, interests, and principles and then superimpose your language, your history and you culture on them .. and no matter what conclusion they come to and challenges they face, they will always act in the interest of the oppressor.”

Another thing I really liked about the film is how they go all the way back to beginning of ancient African civilization and work their way up forward to now. The scholars take on us a journey of black history starting from the beginning of time discuss how black people emerged out of the darkness of the cosmos into Africa as the first homo-sapiens, and then went on to build and create the Nile Valley civilization of Eastern and Central Africa. From there, they show and prove that the ancient people of Kush who went on to build Egypt and Nubia were the first to develop the concept of God, time, math, astrology, science, farming; and were the first educators, doctors, dentists, herbalists, brain surgeons, builders, spiritualists, etc.

“The people from the Nile Valley were the first men and women to orient structures to celestial bodies in order to harness the spiritual energy that’s generated within the structure that is properly aligned with celestial bodies… they were human beings who knew how to manifest the power of god on earth.”

One of the things I learned from watching this film, that I did not know already, was that Africans had sailed to the Americas over 16,000 years ago. I knew that Africans were the first settlers in America and had migrated here in 4000 BC and 1300 AD. But I had no idea they had been here as early as 16,000 BC. These Africans were said to be known as the Folsom people and were here before the Olmecs according to Dr. Claud Anderson. And the Folsom people, along with the Olmecs, Mayans and the later Moors were in the Americas long before the so-called native Americans from Mongolia.

“When someone tells a perfect lie, the truth becomes unbelievable.”

These early Africans in America were descendants from the ancient civilizations along the Nile Valley that had migrated all throughout Africa and the world. And in the late 1400’s, when Spain conquered the Moors and The Catholic Church gained control over a black nation, then they set out to establish a religious system to colonize all black nations by forcefully converting them to Christianity and making them divorce their indigenous cultures. This strategy was used on every generation during slavery and this is why most of us practice Christianity and other bible-based religions today.

“They (the Roman Catholic Church) came to the Americas and… burned the books of the Maya and the indigenous people… saying that they are works of the Devil.”

As a result of being raised in the culture of our oppressors, we have been covertly raised to hate ourselves. On this subject, Prof. James Smalls and Dr. Joy DeGruy discuss how the physical abuse and mental abuse that we faced during slavery caused generational trauma that we still face today. They traced the slave’s survival techniques of not showing love and affection to one another to keep their family members from being separating, to us not showing love to one another today. They also traced the self-hate and colorism complex that we now have today to european standards of beauty that was forced upon the slaves to see white and light as pretty and dark and brown as ugly, which I have been discussing for years now.

“They used those color code cast system on us… light skin black… and through the course of time we are actually repeating exactly what was laid down to us… the reality is we are all the same people, we never was one shade of people.”

One of the things I admire about this film is that although it points the blame at what our oppressors have done to us in the past, it challenges us to take responsibility for what we are allowing them to do to us today. The scholars in this doc discussed some of the social ills that we face as a people are due to the fact that we have surrendered our black power for white acceptance. We remain on the bottom economically because we don’t practice group economics. Our music no longer has a black agenda because we’ve crossed over for money and fame and allowed others to infiltrate and control our music. We don’t know our history because we allow the descendants of our slavemasters and others to teach our children instead of us. And the list goes on and on.

“The only fully actualized system of racism on the planet is white supremacy.”

The film ends off on a good note offering to us possible solutions for what we can do as a people to overcome our plights and take control of destiny. I suggest you watch the film to hear those solutions, but the main solution offered is for us to practice group economics, which means buying our products and services from black people and black owned business. While I agree that we should be practicing group economics, I think that the American dollar is on its way out; so a better solution would be for us to form our own currency in the form of a natural resource such as gold or silver and force others to pay us using our currency. But this a long-term goal and only applies to those who desire to remain living in America, which doesn’t include me.

“You can’t have black power without the black dollar.”

Outside of that, I think the film was amazing and that every black person in America and across the globe should watch it. Out of Darkness will challenge you to think outside of the Euro-centric boxes we have grown up in and to begin to see things from the African perspective of our ancestors. So if you’re looking for something educational to watch for black history month or beyond, for either yourself, your children or students, then check this film out. It’s time for us to come out of darkness and into the light.