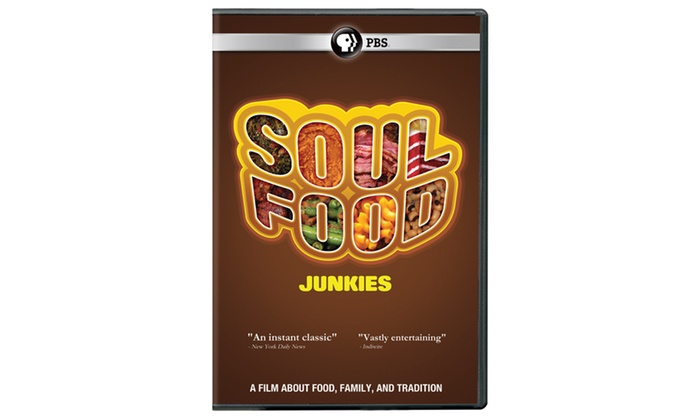 Have you ever wondered how we, as a people, invented and became addicted to Soul Food? Well, I watched a documentary last night called Soul Food Junkies, that explores and answers this question head on. The documentary came out in 2013, so you may have already seen it; but if you haven’t, I would like to share my thoughts on it with you.

Soul Food Junkies is about the producer, Byron Hurt’s quest to discover whether or not soul food is the reason why so many African Americans die from health-related issues. The film was inspired by Hurt’s father, Jackie Hurt, who lost his battle with pancreatic cancer in 2007, due to bad eating habits. When Hurt’s father first became sick, he started to examine his relationship to the food he ate. After discovering that it was the soul food that he loved and ate so much — the greasy fried chicken, pork ribs, mac and cheese, rice and gravy, sweets loaded with sugar, etc — he wondered if soul food in and of itself was the reason for his father’s death. Since soul food has always been the food of Black America, Byron wanted to know the history of how and why we as a people came up with soul food.

Throughout the film, Hurt explores all these questions above and more by speaking with health professionals, family members, cooks, scholars, and everyday people off the street. Through these explorations, we find out that soul food came about as survival food in the South during slavery. The meals we ate during slavery were inspired by a need to make do with whatever slaves could access, which included: greens they grew themselves, leftover meat parts like pig feet, as well as cheap foods like rice and yams loaded with calories to give the slave fuel to work in the field all day. Although the diet of the slaves was much different from what they ate in Africa, they made do with what they had and learn how to make good tasting food out of almost anything; so good that the slaves became ideal cooks for white folks.

As the film continues on, it speeds up over 50 years after slavery into the civil rights era and provides reasons for how the food we had no choice but to eat during slavery was generationally passed down and stuck with us after slavery. One of those reasons were because we are emotional eaters and associated soul food with love and family. Byron showcases this by revealing how black-owned soul food restaurants such as Peaches in Jackson, Ms and Sylvia’s in Harlem played a great role during the civil rights era in giving black leaders and activists a place to go and eat a home cooked meal since they were not allowed to eat anywhere else. For the same reasons, Byron’s mother discussed that she would often pack boxed lunches full of soul food for the family to eat on their annual drives from their home in Long Island to Georgia because of Jim Crow laws that forbade Black people to find hotels and restaurants that would serve them during road trips.

Whether it was from mama’s house or a restaurant, those home cooked meals made black folks feel loved by our people at a time when we needed it the most. Therefore, soul food naturally became associated with showing each other love in the black community; which still sticks with us today. This is why we have so many cookouts, family reunions, and get-togethers today, because we view soul food as a symbol of love.

On this subject of soul food being emotionally connected to love and family, Byron reveals that when he grew older and gave up eating pork, red meat, and other parts of the traditional soul food meals, after adhering to the diet of the nation of Islam teachings, his father took it personal. As Byron put it: “Maybe he felt like that was me rejecting him, me rejecting black culture, me rejecting the food that he loved, you know?” I can relate to Byron’s experience because years ago when I first gave up eating pork, shrimp, catfish, etc to observe the dietary laws of the Bible, my Christian family members thought I was out of my mind and I noticed some of them quietly took it personal as well. So I know for sure that “soul food” is indeed embedded in the emotions of our people and seen as a part of being “Black”. Therefore, no matter how bad the food is for us, the fact that it is view by us as being apart of who we are, we continue to eat it no matter the results.

However, in this film, Byron also showcases that while the majority of us have always chosen to eat the soul food, there has always been conscious groups among us who chose to eat healthy. He showcases how the Nation of Islam promoted healthy living to Black America during the 60’s, and how Elijah Muhammad’s book How to Eat to Live was read and adhered to by many Christians as well during that time period. Dick Gregory, who also appears in the film became a vegan in the 60’s after going on a fast, and wrote the book Dick Gregory’s Natural Diet for Folks Who Eat, which had a great influence on black folks’ health during that time period. The Black Panther movement of the 70’s are also mentioned in this film for establishing school breakfast program for the black community and for understanding that developing a healthy diet was a necessity to developing a black nation.

But the no matter which movement or healthy alternative was made available to us over the years, the majority of Black America has always chosen to eat soul food over healthy food. And as a result, the majority of us end up unhealthy and disease-stricken as we get older; which is now happening to youth as well. This causes the question to raise, is eating soul food regularly connected to rampant rates of diabetes, obesity, and hypertension, and so many other diseases in Black America? In the film, Byron says no and instead exposes the lack of health food available in the hoods and lower income communities as a possible reason for how we end up with the sicknesses that plague the black community. During this segment, Scholars and Activists discuss the fact that many black people live in food deserts and are forced to buy either fast food or processed foods for their meals — which causes the sicknesses and diseases mentioned above — and is an example of 21st century genocide.

As a historian, I agree 100% with Bryon over the fact that the fast foods and processed foods available in the black communities are purposely there to cause early deaths within the black community. But as a realist, I believe that the root cause of the sicknesses and diseases that continue to take the lives of our people daily has been our ignorance of health and nutrition. By ignorance, I mean us not being taught in schools or by our parents growing up about nature, natural health and nutrition and how our physical condition is dependent on what we put inside it. Without this knowledge, most of us grow up thinking that we can eat anything and dissociate health and wellness with foods. Therefore, when we get sick due to the foods we eat, we think its a phenomenon or some genetic deformity, rather than the effects of food and lifestyle choices.

Regardless of this point, Bryon’s film still brings out some much needed information in regards to how we as a people became soul food junkies and how imperative it is that we take our health more seriously. So if you haven’t seen this documentary already, I encourage you to check it out. It’s educational, entertaining and should be a blessing to both you and your family.