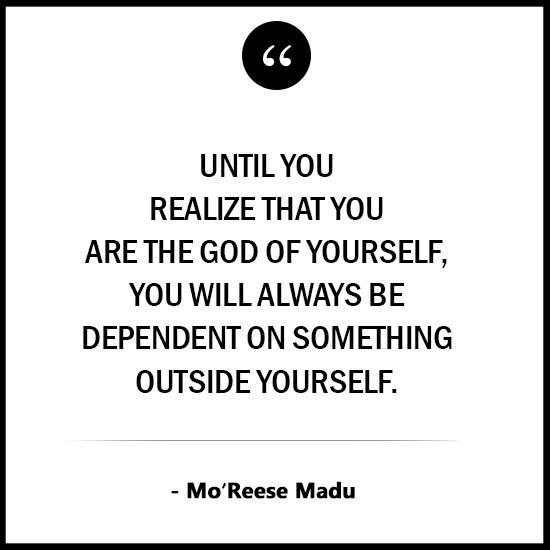 I recently received an email from someone asking me how to become conscious. He stated that he had begun questioning his Christian beliefs and wanted to know what does it mean to be conscious instead of religious? I thought this was a great question, and maybe others might be wondering the same, so I decided to touch on it.

When it comes to seeking truth, I think that many times we get hung on words. I say this because when people are coming out of religion or any Eurocentric belief system, the same words we already know the meaning of, are the often same ones that we have questions about.

Take the word consciousness for instance. Most of us know the meaning of this word. And for those who don’t, we can look it up online and find out that it means: the state of being awake and aware of oneself and one’s surroundings. This definition seems pretty straight forward right? If so, then how come so many people coming out of religion ask how to become conscious?

It’s because the word consciousness has become so over-used that it has become tainted. When you search online for information regarding leaving or evolving from religion, the word consciousness gets mentioned so much until it starts to feel like becoming conscious means adopting another religion. Too ad insult to injury, many conscious groups have created organizations that operate just like a religion; causing further confusion.

Because of this, it causes many people to view the word consciousness with a different set of eyes from what they already know. To clear out this confusion, I’d like to unpack this word in a better way that distinguishes consciousness from religiousness.

As you all know, I publicly denounced my religion in 2018 and I no longer believe in the bible or the God of the bible, nor do I believe in any other religion or any other God. I am NOT an atheist, I just no longer believe in man-made stories and concepts that cannot be proven historically; especially those that were given to us by Europeans. I now form conclusions about spirituality based on historical evidence and my own personal experiences.

You see, all religions are based on beliefs. In order to practice any religion, you have to believe in a deity, the messenger of the deity, and the written documents of the deity. It doesn’t matter whether or not these deities or documents existed historically, its just about believing they did. This is why many followers of the bible and the koran call themselves believers, because they don’t know if what they believe in is true or not. So they live their lives by faith, because their is no evidence.

On the opposite end, being conscious is based on knowing. We’re all conscious, but some of us more conscious than others. The more you know, the more conscious you become. There are no doctrines or dogmas to consciousness; because its a state of being based on your level of awareness. For instance, it is a historical fact that the ancient Egyptians were dark-skinned Africans. Some people are conscious of this and others are not. But regardless, it is still true because it can be proven. So there is no need to believe it, because you can show it.

Which One Is Better For Us?

The circumstances we find ourselves in today, being under the rule of those who hate us, stems from our generational choices in regards to live religiously over consciously.

As we all know, we are the most religious people on the planet. We love God to death and are more serious about religion than the people who gave it to us. But if we take a look at the last 400 plus years of our experience in America, has religion served us well? Let’s take a take a quick look.

As of today in 2019, we as a people own less of America’s wealth than we did after slavery. Many of us are still impoverished and large majority of us are live paycheck to paycheck. And for those of us who are well off financially, we still experience systematic racism. Therefore, since most of us are religious, this means that the God we serve is not answering our prayers.

As a result of this reality, many black folks have began leaving religion behind them. In the last decade, there are more non-believers in the black community than ever before. But why now? After 400 years of oppression, why are so many black folks deciding to leave religion now? Well, if you ask religious folks they will tell you that its because we’re living in the last days lol. But if you speak to non-believers they will tell you its because of consciousness.

Me having been on both sides of the fence, the latter holds more weight. I say this because today we live in a highly advanced technology age and have access to more information than our ancestors did. Because of this, all the history that was once hidden from us about these religions, are now available for us to research and learn about. And the more conscious we become about religion, the less need we have for religion.

Being religious sounds good and holy, but in real life, people prefer someone who is conscious vs. someone is religious. Think about it. If your alternator blew out in your car and you had two friends that worked on cars, which one would you let replace your alternator? The one who told you “i believe I can” or the one who told you “I know I can”?