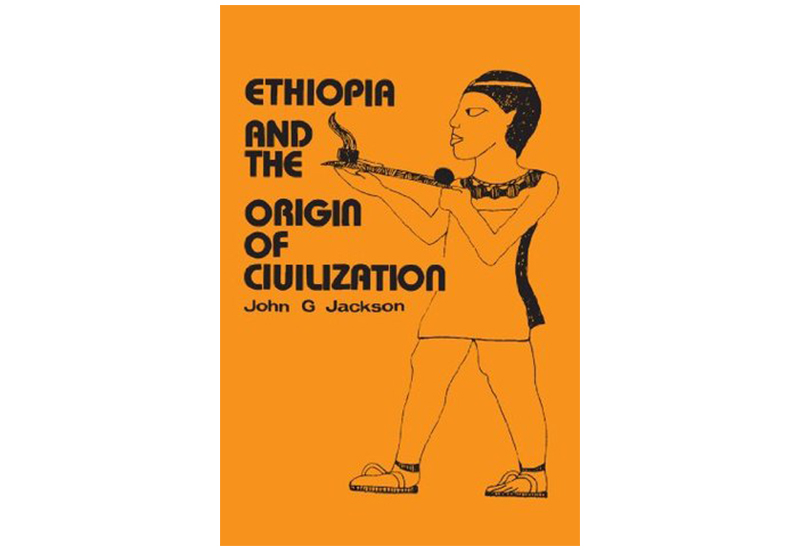 Each year during black history month, we as a people are presented with tons of water-downed information on our history from schools, organizations, lecturers and social media commentators. The majority of the history that we are taught is watered down regurgitated info about slavery, Jim Crow, Civil Rights movement, Dr. King, Harriet Tubman, Fredrick Douglas and maybe a few others. But we are almost never presented with historical information about who we were culturally before we came here. The reason for this is because most of us don’t know who we are, due to being cut off from our heritage during slavery.

According to our late and great historian John G. Jackson, in his book, Ethiopia and the Origin of Civilization, all modern African cultures derived from the cultures of ancient Ethiopia. In this 34 page essay, which was first published into a book in 1939, Mr. Jackson revealed historical, archeological, and anthropological evidence that ancient Ethiopia was the first recorded human civilization, and the wisdom of the black geniuses who built it, was spread all over the world to establish other civilizations.

“Ethiopia was the first established country on earth; and the Ethiopians were the first who introduced the worship of the gods, and who established laws.”

In fact, it was the Ethiopians who migrated to Khemet (Egypt) and became known as the Egyptians by the Greeks. According to W.E.B. Dubois, “predynastic Egypt was settled by Negroes from Ethiopia.” And they were the ones who created the advanced arts and sciences that is shown on the walls and tombs in Egypt today. Egypt itself, was originally just a colony of Ethiopia. The citizens were mostly Egyptians, but the builders and priesthoods were Ethiopian. So before the Egyptians entered into their dynastic period, they were civilized by the Ethiopians.

“Classical historians and geographers called the whole region from India to Egypt, both countries inclusive, by the name of Ethiopia, and in consequence they regarded all the dark-skinned and black peoples who inhabited it as Ethiopians.”

Ancient Ethiopia was much larger than the small country of Ethiopia today. Ancient Ethiopia was said to began in Central Africa and stretched from there to Eastern and Southern Africa all the way to Southern Arabia and Yemen to India and Southwestern Asia. The original inhabitants of these lands were all black-skinned with hair textures ranging from woolly to curly and they were all considered Ethiopians by foreigners. They were extremely wise and considered to be the most advanced people to ever walk the planet. The remnants of their genius can be seen in many artifacts they left throughout the world in the many places they settled.

One of the most famous Ethiopian civilizations in ancient times existed in India. The Hindu people of ancient India, from which the modern religion of Hinduism comes from, were known as Ethiopians. The name Hindu comes from the names Hind and Sind, who were the sons of Cush; the first Ethiopian. According to ancient records, the Ethiopian Indians were “the wisest of mankind.” The Greeks even associated the sacred waves of the Indian Sea with the Ethiopians. In fact, the name India used to mean “black”. And the character of the Buddha that many people follow in India today, derived from the teachings of the Ethiopian Buddha from Ancient Egypt.

“The early inhabitants of India, though they were beyond all doubt an Ethiopic ethnic type… a dark-skinned, broad-nosed people, whom, without knowing the origin of the word, we call Dravidians.”

Another major civilization established by people of Ethiopian descent can be found in the Americas. According to historian Dr. Clyde Winters, the Cushites migrated to America as early as 4000 BC. His research also suggests that the Ethiopian Axum Empire were the first settlers of South America and they left many artifacts to prove who they were such as sculptures, statues, stone tablets, Epigraphs and other cultural creations. And other historians associate the Ethiopians from ancient Nubia with the Olmec people who migrated from Western Africa to Mexico and became the original Native Indians.

“The earliest Egyptians were African Ethiopians (Nilotic Negroes), is obvious to all unbiased students of oriental history… and…we have perfectly reliable proof of the presence of men of the Ethiopian race in pre-Columbian America.”

The wisdom behind the ancient Ethiopians allowed them to establish civilizations all over the world. From eastern Africa to southwest Asia all the way to India and the Americas, traces of the ancient Ethiopians can be found in pretty much all continents. Even the black Aboriginal people of Australia are said to have Ethiopian roots. One of the main reasons the Ethiopians were able to develop civilizations in so many different regions of the world is because they were sailors. According to ancient records, the Cushites were the first seaman in history and they mastered the art of sailing, which enabled them to civilize the ancient world.

“This ancient civilization of the Cushites, out of which the earliest cultures of Egypt and Mesopotamia grew, was not confined to the Near East. Traces of it have been found all over the world.”

The Ethiopians were also known as the originators of all spiritual and religious systems. They were the first Egyptian priests, the first Buddhas and the first Jews. All ancient cultures, from Egypt to India, Greece to Rome, Babylon to China, received their knowledge about the spiritual realms and universal laws from the ancient Ethiopians. They then used the esoteric knowledge of the Ethiopians to form their own spiritual system for their people. This is why most all of the world’s religions today have similar principles, including the bible, because they are offshoots of the original Ethiopian (Cushite) teachings.

“The Ethiopians were the first who introduced the worship of the gods, and who established laws… Even the Romans, who received their religion mainly from the Greeks, admitted their debt to Egypt and Ethiopia.”

Due to their divine wisdom and influence over the world, many non-African groups of the past and present times have sought to destroy the Ethiopians in order to gain control over their civilizations. The Greeks during the rule of Alexander the Great attempted to conquer the Ethiopians of India and failed, but did manage to steal their culture and bring it back to Greece. The Brahmins of Persia settled in India and infiltrated the culture of black Ethiopian Buddhists known as Nagas, and replaced it with a whitewashed version known as Hinduism. The Islamic Arabs colonized many parts of ancient Ethiopia and Egypt and enslaved its people, and shipped many off to different parts of the world. The Spanish, Portuguese and Italians have all attempted to colonize former Ethiopian territories. And the Chinese are currently practicing Neo-colonialism on Ethiopia today.

“Those piles of ruins which you see in that narrow valley watered by the Nile, are the remains of opulent cities, the pride of the ancient kingdom of Ethiopia… There a people, now forgotten… a race of men now rejected from society for their sable [black] skin and frizzled hair.”

Although the ancient Kingdoms and civilizations of Ethiopia are now extinct, her black children still exist. Various research into genetics, linguistics, oral and written history suggests that the descendants of ancient Cush are still located in Eastern African countries, such as Ethiopia, Kenya, Sudan and Somali; as well countries across the Indian ocean in India and Asia.

However, all black people have genetics that trace back to ancient Ethiopia. According to scientific studies, Ethiopia is the birthplace of hue-manity (black people) and archaeologist have found human remains there that date back to over 2 million years ago. If this is true, then all black people — regardless of which ancestral tribe we come from, be it Native or African — have a genetic connection to ancient Ethiopia. This is why so many of our people reconnected with Ethiopia after slavery because they realized who they were.

Ancient Cush is the original black history and John G. Jackson, one of the greatest historians we’ve ever had, wrote an amazing book about their contribution to civilization. Although he’s dead and gone, his work lives on and serves as a great reference guide for us to rediscover the greatness of Ethiopia. Since the people of ancient Cush are the world’s first example of black excellence, then we should seek to learn more about them for black history, rather than the repeated stories of our fall during our plight here in America. Ashe, to reconnecting to Ethiopia.

DISCLAIMER: Only the highlighted quotes within this essay are directly from the book. All of the commentary is based on my own personal research, which comes from many different sources.