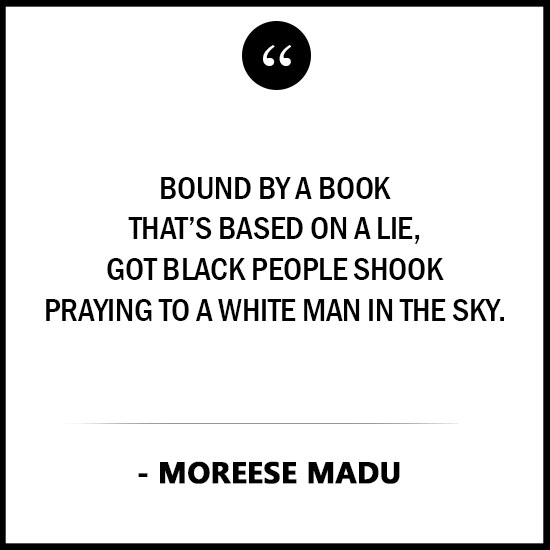 Since I left the Hebrew Israelite faith and the bible in 2018, I am often confronted by believers who try to convert me back to the faith; as if I hadn’t heard all of the same tactics before being a former evangelist myself. And when I explain to people the reasons why I left the faith and no longer believe in the bible or the biblical God anymore, people demand that I prove to them that the bible and God is not real.

I find this to be funny because the burden of proof should be the other way around. If the bible is the word of God and authentic original account of history like believers claim it is, then people should easily be able to provide some historical evidence that proves this to be true. But when I ask people to prove to me that the content in the bible is legit, they usually get emotional and offended; and can only prove the validity of the bible using the bible. Yet, they demand of me to prove to them that the bible isn’t true lol. You see how crazy that sounds?

The truth of the matter is that most believers refuse to research the origins of the bible because they are afraid of what they might find. Many believer are also lazy and prefer someone to give them answers rather than do the research for themselves. Therefore, I am often asked what resources or books have I read that led me to leaving the faith.

In response to the demand, over the past few months I’ve been publishing articles here and there on some of those books. But I have no desire to remain on this subject forever. So instead of me contentiously writing essay after essay on various books, I’ve decided to list the top 10 books on this subject so that I can move on. Here they are below.

In The Worlds Sixteen Crucified Saviors, 19th century historian Kersey Graves, explores the origins of the biblical Christ and traces those roots back to multiple different saviors from ancient cultures that existed prior to the alleged birth of Jesus. It shows how Jesus was not an actual person, but a creation based on earlier mythological stories of deities and god-men saviors who had also been crucified.

2. The Christ Conspiracy: The Greatest Story Ever Sold

In The Christ Conspiracy, Acharya S, a 20th century female scholar of religion and mythology, revisits the time-frame of Jesus and provides documented evidence that the religion of Christianity and Jesus Christ were created by members of various secret societies and religions in order to unify the Roman Empire under one state religion!

Here, John G. Jackson, a renown black historian of the mid-1900’s, explores the origins of Christianity and proves that the overall story of Christ and his 12 disciples existed thousands of years prior in many different folklore accounts in various cultures, beginning with the ancient Egypt. In addition, this book proves how those myths evolved into what is called Christianity today.

4. The Africans Who Wrote The Bible

Here, Nana Banchie Darkwah, a native Ghanaian scholar and historian, traces the roots of the stories in the bible to ancient history of the Akan people who reside in modern day Ghana; whom are descendants of the ancient Egyptians. Using oral history, written history, migration patterns, culture and language, Darkwah shows and proves that the biblical Israelite story derived from Akan people’s folklore. Read my full review here.

5. Blacked Out Through Whitewash

In Blacked Out Through Whitewash, Dr. Suzar, an amazing black female historian and scholar, revisits world history and provides a detailed account of African cosmology and how it is the source of all modern day faiths and belief systems. She also reveals that the majority of black Americans are descendants of the plagiarized story of the Israelites, but that the biblical story is mostly based on astro-theology. One of the best books ever written.

6. The Moses Mystery: The Egyptian Origins of the Jewish People

In The Moses Mystery, Jewish historian Gary Greenburg, explores the origins of the Jewish people and reveals that the first Israelites were Egyptians who the monotheistic teachings of Pharaoh Akhenaten; and that Moses was a native born Egyptian and the Chief Priest of Akhenaten. His research concludes that the 12 tribes of Israel never existed and was made up by plagiarizing Egyptian history.

7. The Early History of God: Yahweh and the Other Deities in Ancient Israel

Here, bible scholar, Mark S. Smith, dives into the history of ancient Israel and explains how the so-called Israelites originally worshiped the Canaanite pantheon of Gods, which including Yahweh, and eventually went to worshiping only Yahweh during Israel’s monarchy reign. He concludes that the Cannanite Gods – El, Baal, Asherah, perhaps Astarte — became incorporated into the person of Yahweh and that the Hebrew bible is a redaction of older sources that were reworked to hide the polytheistic elements in the earlier Hebrew religion.

8. Myths from Mesopotamia: Creation, the Flood, Gilgamesh, and Others

Here, Stephanie Dalley, a British scholar on ancient Mesopotamia, compiles together the most popular myths of the ancient Mesopotamian region, from the Sumerians, Canaanites, Babylonians and others. And these myths feature stories of creation, great floods, prophecies and others found in the bible, but they all predate the existence of the bible and the people in it.

9. Deceptions and Myths of The Bible

In this book, historian Lloyd M Grahm, traces the accounts and stories of the bible back to their original pagan myths. This book also shows how the compilation of the bible is a well-orchestrated plan of deception to control the masses.

In this book, historian Richar Chrispin, shows how the majority of the biblical stories are stolen and plagiarized versions of myths from the Egyptians, Sumerians, and Canaanites. The author also shows how certain Hebrew doctrines and customs such as the sabbath existed way before the Hebrews came along.

The books above are my top recommendations out of the dozens of books I have reviewed on the bible and I recommend them to any religious person on a quest for truth. If you truly desire to know whether or not the bible is based on fact or fiction, and are willing to do your own research to come to these conclusions, then the above resources will point you in the right direction.

But if you are not willing to do any due diligence and prefer to depend on others to do it for you, then you will never develop the ability to decipher whether what someone is telling you is a lie or the truth and will therefore always be subject to being led astray.

You don’t have to get them all, just check out whichever one resonates with where you are on your journey. And if you are low on funds and cannot purchase any of the the books above, I encourage you to check out the following free resources: Jesus Ben Pandira: The Historical Christ and Osiris and The Egyptian Resurrection.

I don’t plan on discussing the subject anymore on this blog, so I hope this article helps you in your search for truth. Feel free to share this post with your family and friends and leave your thoughts in the comments below. Peace & Love!